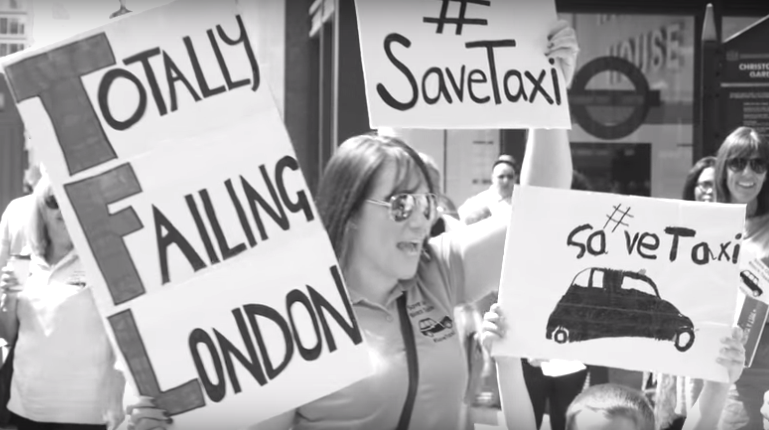 This week sees the London Black Cab community planning to take TfL to court over the granting of Uber’s licence in 2012.

Up till now there have been many protests by Black Cab drivers and their families, with numerous stand-stills and slow protest drives around central London – but it seems without much progress.

Last summer saw a standing protest by families of cab drivers outside TfL’s head office, and crowds of drivers turning up to question times at City Hall with Borris Johnson to challenge the matter of TfL and Uber.

This week has seen another protest announced by the United Cabbies Group (UCG) set to go ahead on 10th February, from Trafalgar Square to Whitehall.

And now a different route is being taken alongside this – to directly challenge TfL with a judicial review.

Artemis Mercer – wife of a London Black Cab driver – this week set up a crowdfunding drive to collect £600,000 for funds for the first stage of the review. If this is to go through, another fundraising drive will be launched.

The group – Action for Cabbies – are calling for reviews on “public safety due to insurance irregularities, lack of rigorous background checks and limited disabled access” and highlight congestion and air pollution issues in central London.

But is this the most effective way in which to tackle any problems with Uber? Perhaps there is another way of challenging the app giant?

As much as we sympathise with the cabbies plight, and with Uber’s recent victory in the high court in mind, we’re of the opinion that any funds generated could potentially be best spent in promoting a rival app for the black cab trade.
Grant Georgiades – Director at Plan Insurance Brokers

Apps for the black cab trade are already in use, such as Gett, Hailo, and Black Cabs App. Could these be promoted and marketed heavily with the positive unique selling points of the trade to rival Uber directly?

A petition set up by #SaveTaxi aims to reach 25,000 signatures, for the same reasons as the crowdfunding by Action for Cabbies – highlighting unlicenced drivers, recent press attention to invalid insurance documents held by some private hire drivers and the need for the strict guidelines to be adhered to by everyone for the safety of the customers.